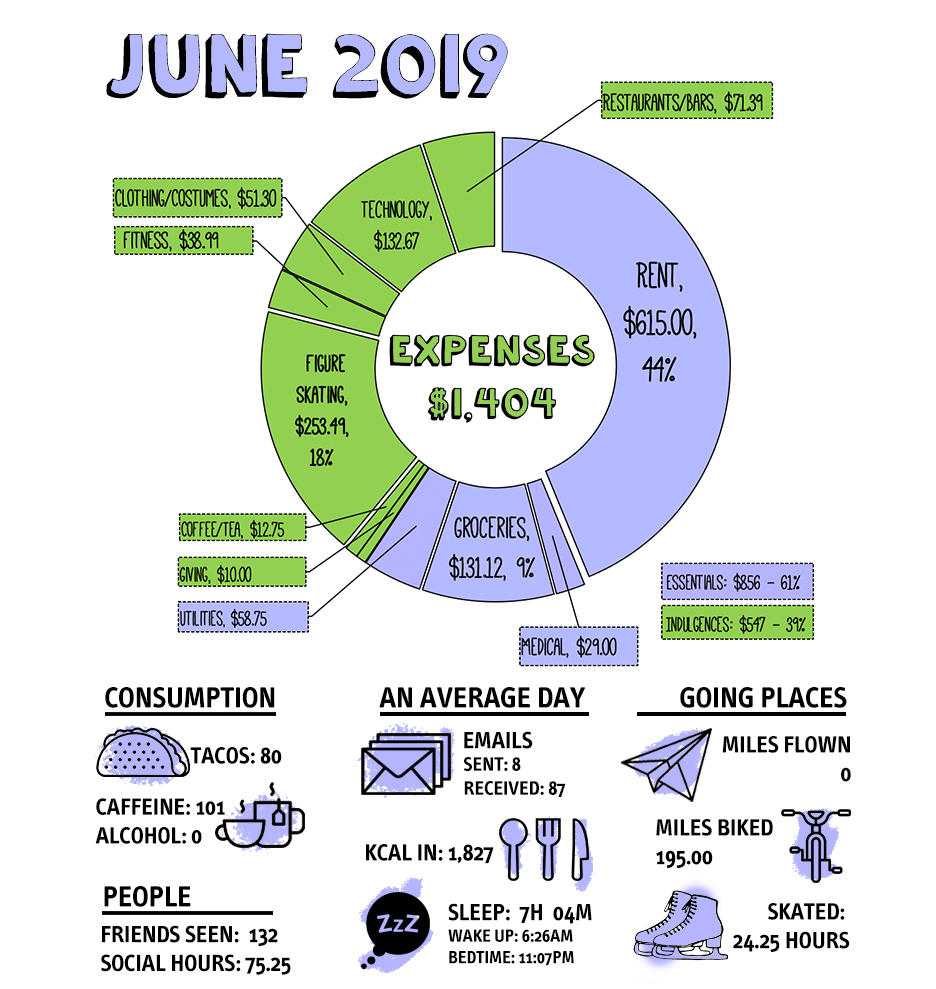 This June, I closed out the kickstarter for A Cat’s Guide to Money, the new title for the 2nd printing of my book, raising $19,211 from over 600 generous people – way more than the $6,000 goal. The early bird books are (hopefully) shipping to backers in July, and the rest of the books and goodies are going out in September! (You can still preorder here.)

After months of complaining, the combination of Kickstarter money (though a low percentage is passed on to me), numerous speaking gigs, and other delayed checks coming in means that my income is rather high this month. I’ve put a LOT aside for future months, including my upcoming month living in London.

I broke my left wrist, unexpectedly, while just falling while standing and chatting with some folks at the ice skating rink. (Pretend I was doing a triple salchow instead, it sounds more impressive.)

It didn’t hurt much, and I honestly thought it was sprained not fractured. Having broken my other wrist 7 years prior, I know wrists are sneaky, so I did get an xray (and then a CT scan) and confirmed it was broken and I probably needed surgery – again.

I learned that people with RA have softer bones, meaning it’s harder to simply cast the bone and have it heal all on its own. Unfortunately, the CT scan also revealed some long-term damage to my joints due my RA – things called “bone cysts”. Nothing we can really do about them, and they aren’t immediately worrying, just something to keep an eye on.

Because my upcoming travel schedule was/is packed (I’m typing this on a plane right now, actually), I had to thread the needle with scheduling surgery and follow-up appointments, and I got in for surgery just 5 days after I broke my wrist. While surgery is a great and justifiable excuse to take some time off, I felt like I don’t have a lot of time to lay around, so the day after surgery (after my mandatory 24 hour by my generous mother and friend S), I was off to a conference all weekend.

The wrist is healing, but I have to be careful skating while it heals, which is a bummer as I don’t want to lose my progress I’ve made since I started back a few months ago. I also can’t bike, which means I’m stuck on transit; which definitely adds up in both time and expense.

Incidentally, the wrist breakage led to me engaging a bit of food- and retail-related therapy, so look for those on my July report.

My pebble smartwatch finally stopped working, 2 years after the company was acquired by fitbit. I am sad, and have now replaced it with a Fitbit Versa, which is fine, but: “it isn’t a pebble”.

Catch up on Video Editing Backlog

This has only gotten worse. Three months running now, I have filmed lots of footage and not finished editing it to upload.

I actually recently rewatched my youtube videos and I don’t hate them! I want to do more of this, I have big plans for videos I want to make – I simply need to prioritize the time. 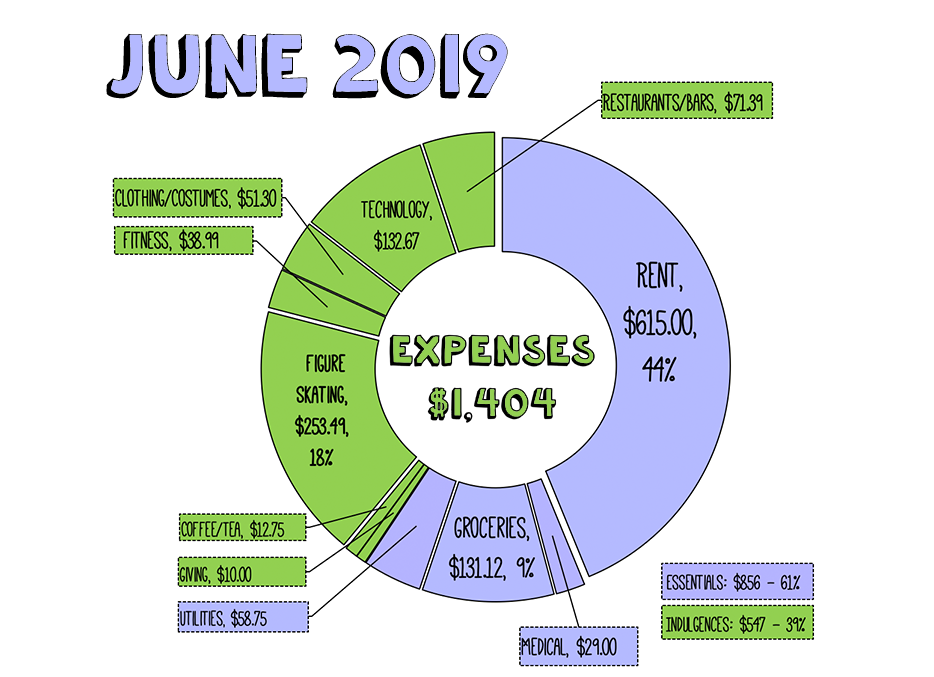 Right on target – 49% of total annual budget at 49% of the way through the year.

Figure skating is super expensive- ice time is one of the most expensive things you can buy. Currently, I’m mostly skating on low-traffic public session at a mall instead of the advanced freestyle sessions and I don’t have a coach (which I need). I pay for 7 weeks of public skate time at once and try to get my marginal cost per hour as low as possible. Year to Date, my marginal cost per hour of skating for ice time is $3.91/hour.

First skate post wrist surgery. Surgeon said “don’t fall on it and you’ll be fine” but if I could avoid that, I wouldn’t have broken it in the first place ;) . . . #twotonedhair #twotone #skating #adultfigureskater #adultfigureskating #selfie #selfportrait #brokenwrist #animehair #pinkhair #purplehair #patinageartistique #figureskater #axel #twizzles

Sinking Funds – not yet spent

This is cash-based accounting, not accrual, so this only accounts for income received this month, not invoices billed. Some of the income may be work done in previous quarters, depending on how fast people pay me. That means that a number of the expenses incurred may be covered by reimbursements or sales received in another month. This month in particular is a LOT fuzzier on the tax savings side due to the

I pay quarterly estimated taxes on my business income, so I save 30% of my net (after expenses) income in a separate account. Please note reimbursements for expenses incurred – such as travel to a gig – are not considered taxable income. There is less here than 20% of June’s net because I have more than $11,000 earmarked for various COGS/expenses related to the kickstarter fulfillment.